Four people were killed in seperate landslides in different parts of Chattogram.

Besides, two more were admitted to the hospital with injuries. The incident happened on Friday (June 17) night.

The deceased were identified as Shahinur Akhter, 30, and Mahinur Akhter, 20. They are your two sisters. Officer-in-Charge (OC) of Akbar Shah Police Station Mohammad Wali Uddin Akbar confirmed the matter.

He said six people, including four members of the same family, were buried in a landslide in Barisalghona area of Lake No. 1 under Akbar Shah Police Station at around 1.30 am. Two sisters named Shahinur and Mahinur lost their lives. At that time, with the help of fire service, their father Fazal Haque and mother were rescued and sent to the hospital.

OC Wali Uddin said that the village home of the deceased was in Pirojpur.

Meanwhile, two brothers named Liton, 21, and Emon, 14, died when another hill collapsed in Bijayanagar Lake City area under the same police station at around 3:00am.

Enamul Haque, a senior official of Agrabad Fire Service, informed media that the injured were sent to Chittagong Medical College and Hospital. On the other hand, the bodies of two brothers were buried in the landslide in Lake city area. Their bodies were recovered from there. 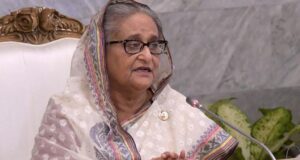