Why does India’s election take so long?

As India heads towards the eighth phase of its marathon general election on Wednesday, many are asking whether the world’s largest democracy deserves such a protracted voting exercise.

For those not up to speed, India’s 16th general election for its 543 parliamentary seats is currently being held in nine phases from 7 April to 12 May – at 36 days, it is the longest in the country’s history.

The five-phase 2009 vote took about a month – this time there are almost double the stages but the process will not take that much longer. The higher number of phases is explained mainly by polling in 18 seats in smaller north-eastern states being staggered across three voting days because of “administrative reasons”.

This is “an election without end” laments political analyst Jawid Laiq. India’s drawn-out election, he argues, leads to several unintended consequences: campaigns become bitter and acrimonious and development work is on hold because of a model code of conduct for candidates and political parties. If vast and populous countries like Indonesia and Brazil can complete their elections in a single day, he asks, why can’t India with its formidable election machinery?

It wasn’t always like this. India’s historic first election in 1951-52 took three months to complete. Between 1962 and 1989, general elections were completed in between four and 10 days. The four-day elections in 1980 were the country’s shortest ever.

But most of these polls were marked by violence and were hardly free and fair. Scores of people lost their lives in clashes – and ballot stuffing and intimidation of voters was common. The local police failed to keep order and were often accused of taking sides under pressure from ruling politicians.

In the 1990s, under a tough new election chief, TN Seshan, things began to change. Mr Seshan sought paramilitary forces from the federal government to keep violence in check during an election. Later the Supreme Court also asked the government to ensure the availability of security forces during elections.

“The long-drawn, multi-phased election in India boils down to a single reason – security,” former election commissioner SY Qureshi tells me. “The local police are seen to be partisan, so we need to deploy federal forces. These forces have been freed up from their duties and moved all around the country to ensure peace. That is why it takes time.”

Some 120,000 such federal troops have been deployed this time – they are drawn from security forces who guard borders, industrial installations and railway properties, among other things. 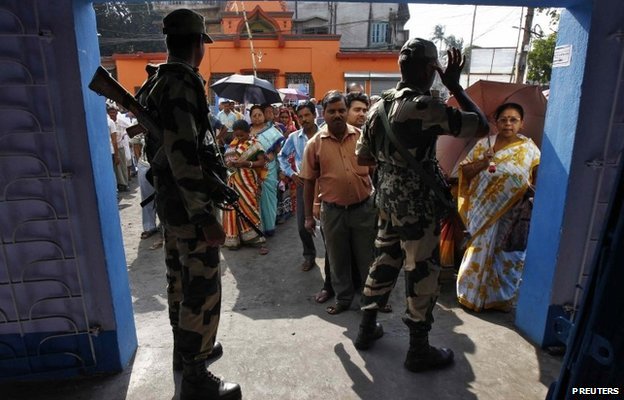 Over 100,000 paramilitary soldiers have been deployed in the 2014 election

In what is truly a daunting logistical exercise, these troops have to be moved about in trains and buses all over the country to ensure security for voters, polling stations, counting centres and strong rooms where the electronic voting machines are stored. “The integrity of elections is paramount. Since we’ve had phased elections, they have definitely become freer and fairer,” says Mr Qureshi.

But don’t long, staggered polls have an impact on voting behaviour, thanks to informal exit polls, social media chatter and whisper campaigns for or against parties?

Political scientist Sanjay Kumar of the Delhi-based Centre for the Study of Developing Societies says there is no evidence to prove this necessarily happens. He reckons that a staggered poll could possibly add to the victory margin of a party which is riding a wave of support and widely expected to win by a large margin.

Many also believe phased elections put parties and candidates whose fates are decided in the early stages at a disadvantage over others who get more time to campaign.

But then parties and candidates who are contesting later rounds also have to spend more money and energy running a longer campaign in India’s scorching summer heat. So a longer campaign possibly favours nobody.

India’s marathon election actually shines a light on one of its most glaring deficiencies: its poorly paid, badly equipped, ill trained and understaffed police. Unless the police force is beefed up considerably and its standard improve, voters will have to live with “elections without end”.

BNP accepts or not, election under this EC: Law Minister

5 Jan polls held with those believing in democratic way of changing power: Rakib